So with the revamp of the Forge World line and the moving of many lines to the Legacy section of the 40k universe, I've had a couple of thoughts.
Now, I know that a lot of stuff has probably been moved as either it just didn't sell very well or because the moulds have worn out or are wearing out. I guess that all the renegade stuff will fall in to this category but some like the marine characters will no doubt be removed to make way for primaris versions or new characters. Anyway, it's the Guard section that I am most interested by.
On the list of guard units that have been moved to the Legacy list are a number of static guns, like the earthshaker battery. These are basically just static versions of standard GW products and so it's not surprising they have disappeared. There are also various Chimera based units. Only one is a true Chimera vehicle, the Storm and this is really only a specialised turret option. The others are highly specialised, such as the scout cars but all of them are a variation on a theme. The fact that the base upgrade has disappeared is not a surprise and given that the various others are linked to either the death corps or the Elysian's it is again not surprising they have disappeared, even if the toolings are still good.

It is not the disappearance of these units that I wish to talk about however but the possibilities that their disappearance brings about. With the release of 9th and the updates that many armies are likely to get plus the various "special" models that the guards have received lately brings me some hope that we might be getting a long awaited overhaul to the troops options. Now I know that many of the vehicles are relatively new and don't really need much updating (Leman Russ Annihilator anyone?) but the infantry line does need some work. The complete lack of female sculpts is one thing but there is a more basic issue, the complete lack of special weapons on many of the sprues. Having to buy the command sets to get access to many of the special weapons for your squads is a bit of an issue that seriously needs rectifying and a new edition is a good time to do it. The easiest way would be via upgrade sets, similar to the marine sets but with some torsos, heads and arms. Together with a redone cadian and catachan sets, this could lead to a whole variety of different regiments being available. Granted they won't be as detailed as the current FW ones but they will still be better than nothing! 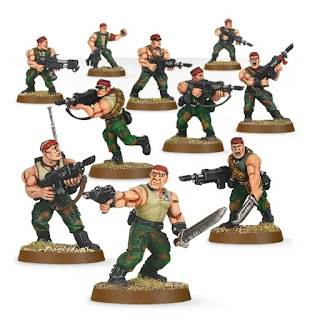 Catachan Jungle Fighters
I'm hoping the removal of so many units from the FW list mean that there is a big update coming to the guard. As mentioned above, I hope that there will be an update to the basic guard boxes and I hope that there will be some sort of upgrade packs to give the various regiments some distinct identity. However my biggest hope surrounds the light vehicles, the Salamanders, Tauros and Centaur. Now I know what a lot of you will be thinking, more guard vehicles! And yes, you would be right, however, you'd also be wrong. The guard have lots of vehicles, I don't deny that but it's the type of vehicles that they don't have that's most marked in my opinion. We have some very good tanks and some good transports, we also have some excellent artillery prices but what we lack are proper fast vehicles. The fast attack section is very thin on the ground and with various units moving to legends it will be even thinner. Yes the troop slot is very thin too but that's a moan for another time.
As it stands, there are 3 fast attack options in the main codex and only one from FW and these are either sentinels or hellhounds. Now, we're getting into pure wish listing territory here but what I would like to see is two vehicle kits to replace the old FW models with mainline codex kits. I have mentioned one of these in the past, a Tauros type of kit, mostly to go with the Militarum Tempestus forces along side their Taurox's. This kit would basically be a copy of the old kit just in plastic and build both options. It will probably require a rework of the design but should be pretty easy to achieve. 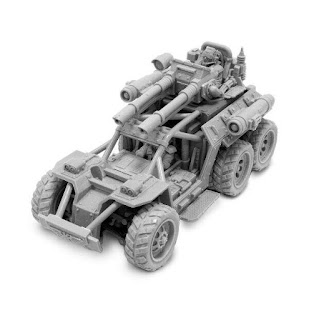 Tauros Assault vehicle
The second kit I would like to see would also be a multi build kit and replace the salamander and Centaur vehicles as armed light transports. Now, i know that this might seem funny, as if there transports then they should be in the transport section right? Well no, as they would be light, fast gun platforms that could take small squads, say 5 or 6 models. I could see them being armed with multi-meltas, plasma cannons or even grav cannons, weapons that the standard heavy weapons teams don't or can't carry. Imagine a special weapons squad with flamers riding in one of these with a multi-melta, charging up to an enemy transport and vaporising it with the melta before flaming the inhabitants and then most likely being annihilated themselves. 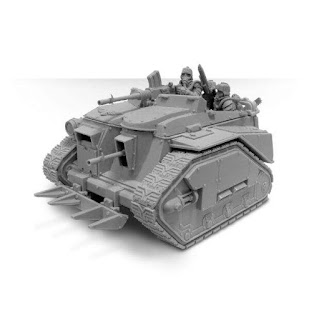 Centaur light carrier
The issue with these ideas I guess is that sentinels have a very similar role to the Tauros and chimeras can for fill the role of the second vehicle in most cases. I just feel that these are really the only two areas that the guard are lacking in and the only options that did exist were forge world models and now even there gone.
Oh, and while we're on the topic of fast attack options, where are my Rough Riders!
Posted by Steve at 12:00:00