After having started talking about my new primaris armies, I thought I should take a bit of a step backwards and talk about the storage that I bought for them. This storage was brought not only for the new primaris units but also to hold the last few units of guard that didn't have a home yet. I already have two of the cardboard KR multicase's and also one of the big old GW cases, a bit like this one; 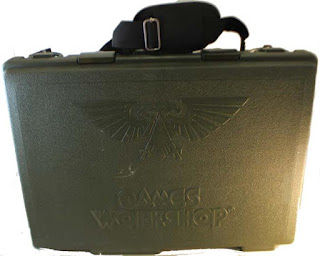 Now, my issue was that I had the two cases plus the GW case but only enough storage foam to fill half the space. I had brought some of my own foam, with the intention of building my own foam tray and I even started building them, cutting out the foam bases and some walls. However, I just didn't have the time to get them finished properly, so the half build sheets were used to store my old school marines in the loft. So, I was back to square one, lots of space but no foam. When I received a voucher for Amazon at my birthday, I decided that it was time to just take the plunge and get some proper foam. After looking around for quite a while at the options, KR still seemed like the best. It took a while longer to figure out what I wanted though, as I had about 50 guard and 4 vehicles that needed a home and also wanted space for my new Marines.
After lots of um-ing and ar-ing I finally settled on these two sets; 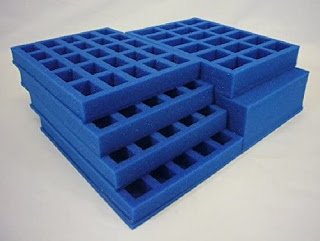 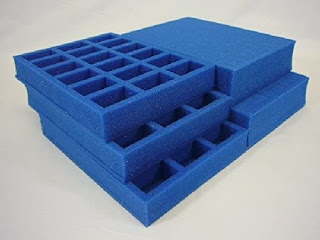 KR tray set: Tyranids set I
These weren't perfect but in reality without doing the KR custom build option, these were the best I was going to get. I have taken one half of the wolves set, the 25 slot storage trays and one half of the Tyranids set, the pick and pluck trays, to form storage for the guards and 4 vehicles and then taken the other halves of the sets, the four 18 slot trays and the 2\3 tray, to form storage for the primaris Marines. This means that I will have storage for the bikes and possibly Inceptors in the pick and pluck section plus space for the rest of the troops in the 18 slot trays.
All tolled, this means that all the units that I want to use have a permanent home now. This does leave some units, such as my Hellhammer without a dedicated tray, one of the bits I was um-ing and ar-ing about, but I have a plenty of foam bits and a square foam thing, a bit like someone has taken a pick and pluck sheet and picked all the bits out of the middle and taken the bottom off as well. It works to line the section I'm putting bigger items, like the Hellhammer, in to before packing the area with foam block, from pick and pluck sections strangely enough!
So, this mean that I can now just grab a storage box and have all the bits I need to play an army with, without having to keep swapping models around all the time, which is very handy when I don't actually remember the last time I played a game!
Next up, more marine stuff.

Email ThisBlogThis!Share to TwitterShare to FacebookShare to Pinterest
Labels: Storage