So, the other day when I was browsing eBay, which is pretty much a daily occurrence at the moment, I came across something that piqued my interest somewhat. On this occasion I was just flicking through 40k related items, from miniatures to terrain to random game related items. It was one of these game related items that caught my eye, namely Space Hulk Tiles.
Now, I'm not planning on buying some tiles, mostly as they are quite expensive for what they are (on eBay anyway) and because after a quick search on Google, I've found a whole host of tiles for free. Only problem is that they are PNG files and not PDFs, so I'm going to have to convert them all to PDF, so that I can then modify them,as the few that I have done this to have not "printed" the same size. Do far they have ranged from 3.5 inch squares to 2.1 inch squares. Ideally I would like to have them at 2 inch squares, as this seems to be a good size for playing.
This process of converting and resizing is going to be pretty time consuming but should not be very complicated, as it should just be a case of printing to PDF from PNG and then reprinting at a lower percentage to get them all to be the same size in the end. Once this has been done, I'll look at combining the files and getting multiple bits on to one sheet and then printing. Once this is done I'll stick the price tag to card and then cut them all out to give me lots of playing pieces to use. Now, I won't do every PNG file, as I have several duplicates, as in I have 6 different types of 3 square long corridors and 8 different 2 and 4  square long corridors, when I'll only need one of each type. 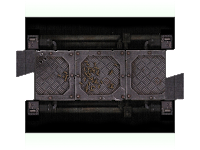 The plan is to have a few corridors but mostly lots of rooms, including several big rooms. This is for a couple of reason, the first being that I don't want to limit who can fire to much. Yes, it will be limited, due to the terrain and such but if the maps just long corridors, then one the front person will get a clean shot, the couple behind might get a bit of a shot but everyone else can't see any thing. This is also one of the reasons that I want the corridors wider, so that more models can see and shoot, in addition to the fact that models on 32mm and especially 40mm can't technically fit in the original corridors. The second reason I want more rooms than corridors is because I want this to have a more arena feel and less of an old skool space hulk feel. Another reason for more rooms, especially larger rooms, is to enable scatter terrain to be placed, giving cover for obscurement. 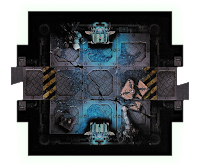 Hopefully if I manage to get all this sorted I should be able to create a versatile, modular game board that packs away pretty small and neatly. It should also, hopefully, give some good games.
Posted by Steve at 12:00:00